Because I’m interested in working with reality television, I was most intrigued by Lisa Gitelman’s discussion on the problems of ‘dataveillance,’ or the collection and usage of data from individuals regarding their identities and personal attributes. She questions the ethics of this process in our current age, citing Rita Raley’s examination of those who try to push back with online tools that inhibit the ubiquitous data mining of our contemporary Internet. In ‘Dataveillance and Counterveillance’ (Raley’s chapter in the book for which Gitelman provides the eponymous introduction piece), Raley unpacks the typical argument in favor of allowing passive data mining: a “personalized Internet” is only possible if our individual tastes and preferences are fair game for circulation, and “voluntarily surrendering personal information becomes the means by which social relations are established and collective entities supported” (125). The necessity of trading privacy for inclusion is certainly problematic, and I see it as a specific link to my interest in reality television shows wherein contestants formally trade their privacy (as well as their very power of self-representation) for the benefit of inclusion on a television show and potential financial gain. Raley then introduces the idea of a ‘superpanopticon’ which must necessarily exist to register our interpellation by databases; while this for her is a link to a discussion of ‘corpocracy’ and ‘cybernetic capitalism,’ I identify it for my purposes as a term to describe the reality show institution which mines identity and individual action to construct the desired narrative for commercial purposes.

Aiding my consideration of a show like Survivor as one such ‘superpanopticon,’ Raley cites Kevin D. Haggerty and Richard V. Ericson who posit that surveillance “operate[s] through processes of disassembling and reassembling. People are broken down into a series of discrete informational flows which are stabilized and captured according to pre-established classificatory criteria. They are then transported to centralized locations to be reassembled and combined in ways that serve institutional agendas” (127). This is a lengthy excerpt, but I find it so startlingly appropriate to describe how contestants can be treated on reality television shows like Survivor. Contestants’ thoughts and feelings are mined on location through individual interviews known as ‘confessionals,’ which are then transported to a central editing station to be assembled together at the whim of the producers. My initial project idea to explore Survivor confessional frequencies by episode and season draws from this notion (which I could not have stated so well before) that players are mere building blocks in a larger narrative, who can be highlighted or backgrounded as the show desires. After reading Gitelman’s caution regarding the ethics of dataveillance, though, I begin to wonder: Even if I can use the confessional data to learn and expose something about the superpanopticon of Survivor, am I still inescapably guilty of drawing on the identities and representations of others for the alleged benefit of collective knowledge? 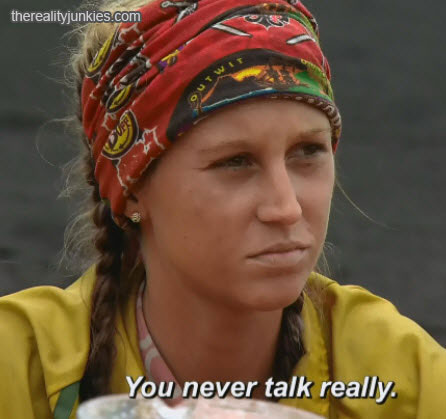 “Purple” Kelly Shinn, infamous as one of the most under-edited contestants in  Survivor history